Taking time to paint the dragons 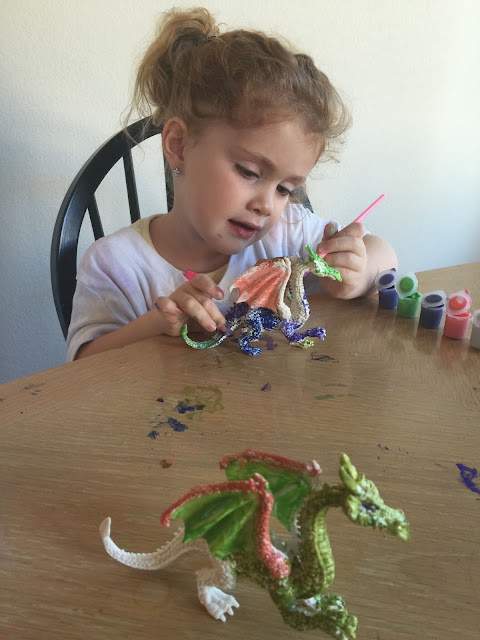 We've all heard the saying, "Taking time to smell the roses." But I've never been much of a gardner. And too much flower sniffing makes me sneeze.

Still, the sentiment is important! We get so caught up sometimes in everyday life--going from here to there without even thinking about it. And sometimes we look up and can't believe how fast time is passing. I swear--just yesterday it was October. Now it's nearly February!

I think when you have kids it's especially hard. You desperately want to spend time with them, but things always seem to come up. My daughter will ask if I will play with her and I find myself saying, "I will in a minute. I just have to (fill in the blank.)" And often that "fill in the blank" isn't even important in the grand scheme of things.

And then sometimes I look up and I realize she's getting older. She'll be five in June. And at some point she's not going to want me to play with her anymore. She's going to shy away from my hugs and be embarrassed at public displays of affection. I hope we will still be great partners in crime and that she'll always know she can come to me when she has a problem. But it'll be different. There won't be that sweet innocence she has now. That heart overflowing with love that she's not afraid to share. Right now I swear her most common phrase is, "I LOVE YOU." And it hurts a little to think that won't always be the case. That she will be hurt by someone. She will be told she's not good enough. That she will believe this. And I won't be able to convince her otherwise.

One time a few months ago, she was being silly--kissing me like a thousand times in a row and finally I laughingly had to tell her to stop. STOP KISSING ME! I cried. And then I thought about how crazy that was. Because I wanted all the kisses. And someday I won't get them anymore. So I need to take as many as I can get now! :)

Yes, we all have responsibilities. And we all have busy lives. But they are so fleeting and it's important to keep an eye on what really matters--and what is just distraction to that. So this year I have made a vow. To take the time. To play the games. To hug the hugs. To paint the dragons. To just BE in the moment with the ones I love.

Because nothing can be more rewarding than that.